Longer tweets have always been in discussion, with the 140 character limit seen by many as a restrictive factor, something that makes the tweet process more difficult and may keep new users away. And now, with Twitter growth flatlining, they need to try new things.

And this is what they have come up with: 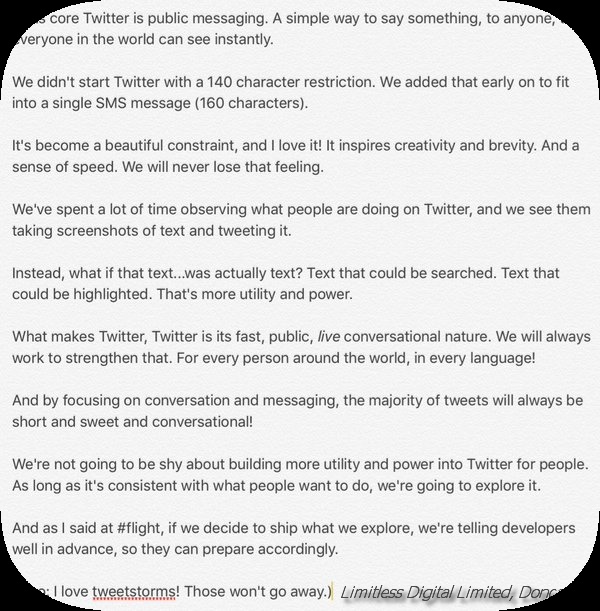 The reasons behind the test are varied – as explained by Twitter, one of the key consideration is how tweets are used in different regions. Further than that, Twitter says that when people feel less restrained by the character limit, they tweet more often.

“In all markets when people don’t have to cram their thoughts into 140 characters and actually have some time to spare, we see more people tweeting – which is awesome.”

Definitely, Twitter needs more people tweeting – while they have seen consistent growth in daily active users over the past year, as noted, their overall user count has stagnated massively. Could enabling more characters inspire more people to tweet, more often?

It seems unlikely, but what is clear is that Twitter needs to take risks – and the fact that they’re doing so now may suggest that their user count hasn’t shifted much since their last report. What it will definitely do is it will spark fierce debate amongst the Twitter community – something Twitter has acknowledged in their announcement:

“We understand since many of you have been tweeting for years, there may be an emotional attachment to 140 characters – we felt it too. But we tried this, saw the power of what it will do, and fell in love with this new, still brief, constraint.”

The early positive news for Twitter is that Twitter stock jumped in response to news of the test, though it’s too early to suggest it will have any meaningful impact on the platform. Really, it seems like a moderate measure from Twitter. 240-character tweets are going to look chunky and annoying in timelines, but they’ll normalise over time, and people will get used to the new limit, if that is what they go with. But it does also feel like its counter to the spirit of what Twitter is, and the habitual behaviour that the 140 characters limit has instilled in us over time.

Sure, there are tweetstorms that go well over the current limit and need to be read across various tweets, but you could argue that they’ve become a feature, that users are now accustomed to consuming tweets in this way. As such, longer tweets likely aren’t necessary.

So, that was my quick blog on how tweets could very well soon become 280 characters, what are your thoughts? Let us know!